Navigating Our Mists of Darkness

On June 6, 2019 a haboob (dust storm) engulfed the town of Big Springs, Texas. You can see by the picture that it completely covered the town making it difficult to see anything. 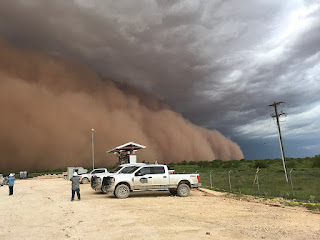 In the Book of Mormon we read of Lehi’s dream of the tree of life (1 Nephi 8). Lehi said he saw a tree that had fruit that “was desirable to make one happy, the most sweet of anything he had ever tasted”. He also saw a straight and narrow path that led to the tree. There was also a rod of iron and a river along the path.

He described one group that was trying to get to the tree and partake of the fruit. He said that they were on the path that lead to the tree but that a mist of darkness arose and “they who had commenced in the path did lose their way, that they wandered off and were lost (1 Nephi 8:23). I can understand that if I did not have something to cling to and a haboob like the one in Texas surrounded me, I would get lost. In the scriptures when someone wanders off the gospel path and is lost, they usually are not keeping God’s commandments or not doing the things that will keep the Holy Ghost in their lives.

Lehi also describe two other groups that managed to get through the mist of darkness safely and partook of the fruit of the tree. He said the first group on the path caught hold of the end of the iron rod and clinging to it made it through the mist of darkness and made it to the tree and partook of the fruit. But after they had partaken of the fruit, saw people in a great and spacious building. They were mocking those that were on the path and those that were at the tree partaking of the fruit. The people in this first saw the people in the building, they became ashamed and fell away. 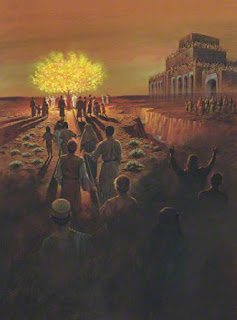 Lehi's Dream of the Tree of Life

The second group also caught hold on the end of the iron rod, but they held fast to it and when they got to the tree “they did fall down and partook of the fruit”. They also saw the people that were mocking them and making fun of them, “but they heeded them not”.

Nephi, Lehi’s son, asked to know the meaning of his father’s dream and he was given was shown the same vision and then given the interpretation (1 Nephi 11 & 12). He learned that the tree of life represented the Love of God, or Jesus Christ, that the iron rod was the word of God (the scriptures), the great and spacious building was the pride of the world, the mist of darkness was the temptations of the devil, and the river was the depths of hell.

In a BYU-Idaho devotional Elder Daniel L. Johnson spoke of Lehi’s dream (Continually Holding Fast to the Rod of Iron) and compared the three groups to members of The Church of Jesus Christ of Latter-day Saints. He said the group that were lost in the mist of darkness because they did not get grasp the iron rod. They did not read the scriptures, pray, attend church or the temple. Because they had no foundation, they became lost and fell away.

The second group, those that made it through the mist of darkness and partook of the fruit but became ashamed and fell away, did everything they needed to get to the tree and partake of the fruit. The problem with this group was that once they made it to the tree and were partaking of the fruit, they got distracted by those in the world that were mocking them. They gave in to the “temptations and attractions of the world”.

The third group held fast to the iron rod and made it to the tree. Once they got to the tree they fell down and partook of the fruit. They realized what the tree was, a representation of the Son of God. They fell down and worshiped him. They were able to partake of the fruit of the Gospel of Jesus Christ. This group also saw the people in the great and spacious building that were mocking and making fun, but they heeded them not. Their testimony and commitment to the Gospel of Jesus Christ was firm and unshaken. They continually read the scriptures and words of the living prophets, they were firm and steadfast in keeping the commandments, so their foundation was solid and when temptations came, they did not crumble and fall.

We all experience times in our lives when the mist of darkness surrounds us. We experience the loss of a loved one, we have health difficulties, we lose our job, we are criticized by others, or are accused of something we did not do. The only way to get through them is to hold fast to the iron rod; the scriptures and other basics of living the Gospel of Jesus Christ. We sustain our church leaders and follow their counsel. We also do not give heed to those who mock and make fun of The Church and our testimony of Jesus Christ and his atonement. Doing these things is the only safe way to stay of the path that leads to the tree of life and be able to partake of the fruit which is life as an eternal family in the presence of Heavenly Father and Jesus Christ.

My life has been a combination of the two groups that make it to the tree. There have been times in my life when I get distracted and lose my way. I have managed to find my way back and through the atonement of Jesus Christ and back holding fast to the iron rod and partaking of the fruit. I now realize that the best way to not give into the worlds temptations is to heed them not, just ignore them. My testimony is now strong enough to withstand their mocking. I have tasted of the fruit and know that nothing compares to the sweetness of the fruit because it really does make me happy and is the most sweet of anything else there is.

I would like to hear from you on how you have navigated your mist of darkness and held fast to the iron rod until you made it to the tree of life and fell down and are partaking of the fruit. To those who are still lost in the mist of darkness, I invite you to contact me to find out what you need to do to get through it.

Email ThisBlogThis!Share to TwitterShare to FacebookShare to Pinterest
Labels: Atonement of Jesus Christ, Haboob, Mists of Darkness, Temptations of the world, The Book of Mormon, The Iron Rod, The Straight and Narrow Path., The Tree of Life