Do You Believe in Santa Clause?

As we enter the Christmas season, I would like to share some of my thoughts about Christmas and what it means to my family and me. Sometime ago I was talking to one of my grandsons who did not believe in Santa Clause. I told him I believed he was real and then put together a little booklet about some of the stories around the world about Santa Clause.  I would like to share some of those thoughts with you. 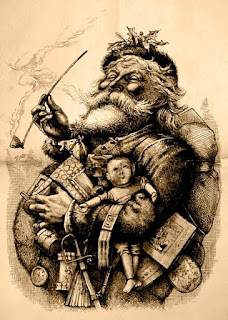 Santa Claus has many different names such as Saint Nicholas, Father Christmas, Kris Kringle and as Sinterklaas. Here in America we know him as Santa Claus. He lives at the North Pole with his elves and reindeer. Santa has a naughty and nice list and he takes toys to the good boys and girls in his sleigh that is pulled by eight magic reindeer. Santa is able to enter into the homes by going down the chimney. He loves eating the cookies and milk that the children leave out for him.

We are now living in the 21st Century. Some people believe the real Santa lived Seventeen hundred years ago in the 4th Century. His name was Saint Nicholas and he was a Greek Catholic Bishop of Myra. He is also the primary inspiration for the Dutch version of Santa called Sinterklass. 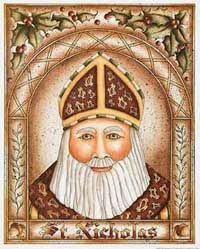 In the Catholic Church, St. Nicholas is the patron saint for children, sailors, and is the friend and protector of all in trouble and in need. One story of St. Nicholas tells of how he saved three children who had become lost and were captured by an evil butcher. St. Nicholas appears and asks God to restore the children’s life and the three children were given back to their families. December 6th is St. Nicholas Day in many places in Europe and is a day of feasting and giving gifts.

Father Christmas was said to live in the mountains of Finland. He did not give gifts to children, but was known for his good cheer. He did not wear a red robe, but a green one. 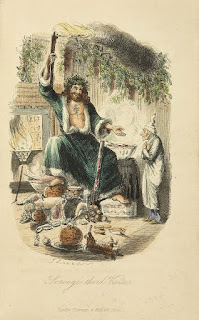 Today’s Santa is a combination of St. Nicholas and Father Christmas. In the early 1800’s St. Nicholas’ name was changed to Sante Claus in some publications. Then in 1823 Washington Irving published “A Visit from St. Nicholas” now better known as “The Night Before Christmas”.

In 1897 a little girl wrote to the local paper and asked if Santa was real. She wrote:

Dear Editor—
I am 8 years old. Some of my little friends say there is no Santa Claus. Papa says, “If you see it in The Sun, it’s so.” Please tell me the truth, is there a Santa Claus?
Virginia O’Hanlon


Well the Sun Times wrote back to Virginia and said:

“Yes, Virginia, there is a Santa Claus. He exists as certainly as love 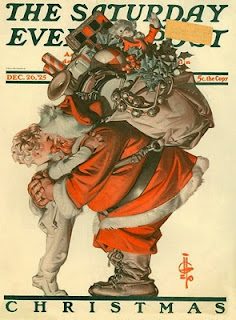 and generosity and devotion exist, and you know that they abound and give to your life its highest beauty and joy. Alas! how dreary would be the world if there were no Santa Claus!

Not believe in Santa Claus! You might as well not believe in fairies.  .  . Nobody sees Santa Claus, but that is no sign that there is no Santa Claus. The most real things in the world are those that neither children nor men can see. Did you ever see fairies dancing on the lawn? Of course not, but that’s no proof that they are not there.”

If you asked me if I believe in Santa Claus, I would answer absolutely. The “real” Santa gave us the best gift ever – His Son.

The real reason we celebrate Christmas is not because of Santa, or St. Nicholas or whatever you call him; it is to remember the birth of the baby Jesus Christ.

In the Bible, John 3:16 it says: “God so loved the world that he gave his only begotten Son”. So Jesus Christ is God’s gift to us. Do you remember the story of Jesus’s birth?

The Angle of the Lord came to Mary and told her that she would have a son and she should call his name Jesus and he would be to the Son of God.

Later we are told that Joseph and Mary had to travel from Nazareth to Bethlehem to pay their taxes. While they were in Bethlehem, Mary gave birth to Jesus

In Luke Chapters 1 & 2 we read about the Shepherds: 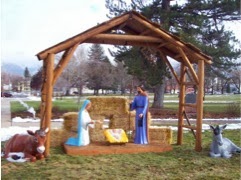 “And the angel said unto them, Fear not: for, behold, I bring you good tidings of great joy, which shall be to all people.

For unto you is born this day in the city of David a Saviour, which is Christ the Lord.

And this shall be a sign unto you; Ye shall find the babe wrapped in swaddling clothes, lying in a manger.

And suddenly there was with the angel a multitude of the heavenly host praising God, and saying, Glory to God in the highest, and on earth peace, good will toward men.

And it came to pass, as the angels were gone away from them into heaven, the shepherds said one to another, Let us now go even unto Bethlehem, and see this thing which is come to pass, which the Lord hath made known unto us.

And they came with haste, and found Mary, and Joseph, and the babe lying in a manger.”

Joan M. Olenycz tells us in the December 2010 Ensign:

“Heavenly Father gave this gift to all of us, young or old, rich or poor. We did not have to search the shops for it. It did not cost a single penny. The most treasured gift of all was wrapped in swaddling clothes and laid in a manger. It was sent to us with love from our Heavenly Father."

Your comments and questions are welcome