GPS systems are amazing technology. I can’t imagine trying to get somewhere that I am not familiar with without a GPS system. I know for some that have always had GPS to believe it but  there was a time when we did not have it. I am old enough to remember trying to get around using paper maps and the World Atlas. Most of the time the GPS on my phone works the way it should but there have been a few times that you end up in a vacant field or you get sent to the wrong place.

Recently, while visiting Indianapolis, Indiana we wanted to go to the Central Canal Walk. The Central Canal is a 3-mile area in downtown Indianapolis that was part of a project to revitalize the downtown area and is a beautiful walk. We had no idea where we were going. When we got downtown, the GPS kept us going in a circle. It kept saying turn right on…, turn right on…, turn right on... At one point I intentionally turned left to see if it would reroute us and get us to the correct place. When it had us going in circles again, I finally stopped and asked someone where the canal was. They said it was below us! We had to park and go down some steps to get to the canal. We were in the right place, but the GPS did not know it. 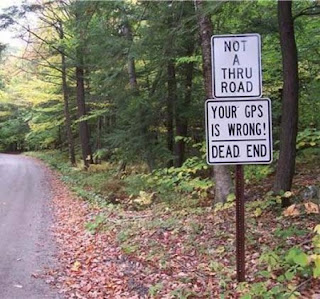 A few years ago, we were in Chicago for a conference. While I was in meetings my wife wanted to go to the Museum of Science and Industry, so I programmed the GPS with the address on Lake Shore Drive and sent her off. Two hours later she called and asked how long it was supposed to take to get there and I told her about 45 minutes. She was driving on a freeway and I asked what the last exit was she remembered, she said Des Moines, Iowa! She was headed back to Salt Lake City, Utah. When she returned, I looked at the GPS and noticed that it had Lake Shore Drive, in Salt Lake City; not Chicago. I realize that the GPS was working properly and that I had not paid attention to where it was going to take her, but I thought it was crazy to have chosen the destination that it did.

Sometimes the GPS can get frustrating. If you have to stop for gas or to eat and you get off the path it has you on, it is constantly saying “rerouting” and then tells you to make a U turn or it tries to get you back on the right path. If I think that I know where to go and make a wrong turn, again the GPS says “rerouting” to get you back on track. I have often wondered if after making several wrong turns that the GPS would finally yell at me: “look if you don’t want to listen to me then why did you ask for directions? I think the GPS programmers should build in a comment after making enough wrong turns: “Hey, stupid, listen to me” and then tell you what it wants you to do.

GPS systems are polite, they don’t judge or criticize. If you ignore their directions or you make a mistake, it simply says “rerouting” and then helps you get back going in the right direction. The choices we make every day can be like a spiritual GPS system. When we make a mistake or willfully choose to leave the straight and narrow path of the Gospel of Jesus Christ, our Savior is there patiently waiting to “reroute” us to get back on the path that leads back to him. For most “mistakes”, other that the serious ones, there is no criticism or heckling. He is always there with outstretched arms waiting to embrace us in his love when we correct our course.

While teaching the adulterous Samaritan women at the well, he did not condemn her for her choices in her life. He taught her that he was sent to redeem her from her sins and that by accepting him as her Savior, she would have the living water that would give her everlasting life. She chose to reroute her life and follow his teachings and then helped others to do the same.

GPS systems are only effective if we choose to follow their directions. The Atonement of Jesus Christ is available to everyone that chooses to accept the Savior’s admonition to come follow him and do the things that he says. He is there for us to reroute us when we when we choose to deviate from the path that leads to happiness in this life and eternal life in the world to come.