Once again we are coming to the end of the great NCAA tournament season known as March Madness. We are down to the top two teams Virginia and Texas Tech. Along the way there were several Cinderella teams that upset the teams that were supposed to make it all the way to the end of the “big dance”. Seven of the games were decided by one or two points. Four games went into over time before a winner was decided.

I did not see all of the games during the tournament, but I did watch my share. Some games were extremely exciting, and others were well boring. Much of the madness comes from the broken brackets (the odds of picking a perfect bracket are 9.2 quintillion), lost time at work watching games (l love the “boss button” on the NCAA web site), watching players do stupid things - they are only 18-20+ year old kids what do you expect?, mistakes by referees, stupid fans, and annoying announcers and analysts.

One of the best examples of the effects of March Madness was found two years ago when 12 year old John Phillips was caught on camera having a melt down as Northwester lost their game to Gonzaga. 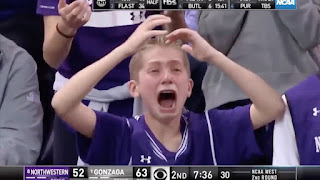 One of the things I noticed this time was I never heard coaches or players make excuses or blame others for their loss. Maybe I just did not see the right interviews, but I did not see any. I was especially impressed by Bruce Pearl, the coach of Auburn, after their 1-point loss to Texas Tech in their semi-final game. During a post-game interview, the interviewer seemed to be trying to get the coach to blame the referee for their loss and he would not do it, taking full responsibility for Auburn’s loss. I also never hear any of the players during the tournament take credit for their victories but instead included the entire team in the win. I like the class the players and coaches showed this year.

This weekend was not only the semi finals for the NCAA Men’s Division I Tournament, but it was also the 189th annual general conference of The Church of Jesus Christ of Latter-day Saints. These two events seem to come at the same time every year. I would have like to have been a fly on the wall in the room where the presiding authorities were discussing which conference they would have the priesthood meetings and which one would have the general women’s meetings. It seems the sisters won the discussion because they get to stay home and watch the semi final games while the brethren of the church attend the general priesthood session. If you want to see my solution to this problem check out one of my past blogs from April 1, 2017 “Historic Agreement between the LDS Church and the NCAA” (yes, it was an April Fools Post).

Sessions from general conference had some great advice on how to find peace in the madness of the world around us. Here are a few thoughts that impressed me:

President Eyring, 2nd Counselor in the First Presidency, warned us of the pattern of decline of the people after the Savior visited the people in America and they then experienced almost 200 years of peace and prosperity. The signs of decline are:

1.     Pride
2.     Classes – no longer having their goods in common
3.     Increased sin
He said that increasing our faith in Jesus Christ and his servants is the best way to counter act a society that is in decline.

Sharon L. Eubank, 2nd Counselor in the General Relief Society Presidency, said that Satan is trying hard to isolate us and cut us off from the source of light and wants us to think that we are the only ones that are experiencing difficulties. If we feel our flame of testimony fluttering, have faith that Christ’s light will sustain us. He is the source of truth and light.

D. Todd Christofferson, of the Quorum of Twelve Apostles, said that we must do all we can to end suffering and prepare for the time when suffering will be done away when the Savior, Jesus Christ comes again.

Elder Rasband, of the Quorum of the Twelve Apostles, said that our testimony in Jesus Christ is our greatest defense again evil.

President Russell M. Nelson, president of the church, spoke in the priesthood session about the importance of repentance, that it is not a one thing and done situation. Repentance is not an event; it is a process. We need to prayerfully seek to know what is stopping us from repenting and fix it. In his Sunday address he said that salvation is an individual matter, but exaltation is a family matter. If we want to have the opportunity to be with our family fall all eternity; pay the price now!

Anyone that knows me, will agree that I love everything about March Madness, at least the NCAA tournament, but I do not like that madness in the world around us. It seems that this madness is growing at an ever-increasing rate. Watching the sessions of general conference of The Church of Jesus Christ of Latter-day Saints helps me find peace in March (and other times of the year) Madness around us. The peace that the Savior Jesus Christ can give is the only answer for the wickedness in today’s world. We can have peace now and hope that when the Savior does return the madness will end forever. Until then at least we can enjoy the madness found in March and the NCAA Tournament.