From the Cross to an Empty Tomb

Today is Easter, a day when we celebrate the resurrection of the Lord Jesus Christ. From the words of the hymn “I Believe in Christ”, “I believe in Christ oh blessed name. I will worship him with all my might, and I shall live with joy and love in his eternal courts above”. 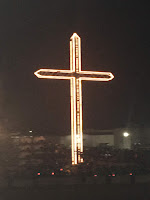 Often when I am running in the early morning hours I see this cross that stands as a witness of the sacrifice that our Savior Jesus Christ made for each of us. The cross is not in front of a church, but the local John Deer Dealership. It shines brightly as a witness of the owner’s faith in Christ. They are not afraid to testify to the world of their faith. Seeing it every morning warms my heart and reminds me that I too am one of His witnesses and that I am here as a missionary for His Church today.

Seeing this cross reminds me that Jesus Christ suffered and was crucified so we could have our sins forgiven and cleansed. In an interview with President Gordan B. Hinckley, the president of The Church of Jesus Christ of Latter-day Saints, the interviewer asked why our church does not have the cross on our buildings. President Hinckley responded that we worship the living Jesus Christ. In January 1 2000, The Church of Jesus Christ of Latter-day Saints published a document called “The Living Christ”. Part of that document says:

He rose from the grave to “become the first fruits of them that slept” (1 Corinthians 15:20). As Risen Lord, He visited among those He had loved in life. He also ministered among His “other sheep” (John 10:16) in ancient America. In the modern world, He and His Father appeared to the boy Joseph Smith, ushering in the long-promised “dispensation of the fulness of times” (Ephesians 1:10).

Of Him the Prophet also declared: “And now, after the many testimonies which have been given of him, this is the testimony, last of all, which we give of him: That he lives!

“For we saw him, even on the right hand of God; and we heard the voice bearing record that he is the Only Begotten of the Father—

“That by him, and through him, and of him, the worlds are and were created, and the inhabitants thereof are begotten sons and daughters unto God” (D&C 76:22–24).” 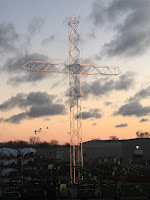 Sometimes when I am running the sun is beginning to rise and instead of seeing the cross shining in the dark, I see a fading cross as the skies brighten. Just as sure as the sun will rise each morning bringing an end to the darkness; Easter morning is a witness to the world that Jesus Christ rose from the dead. The tomb was empty, and the risen Lord appeared unto his apostles and others that morning. He appeared to thousands of his people here in ancient America and they each had the opportunity to feel the wounds in his hands, just as the Apostle Thomas did.

I add my testimony that I know that Jesus Christ lives again. Just as the dark of night fads away as the sun rises, when we die, the darkness of the grave will give way on the morning of the resurrection. Because of the living Jesus Christ, the darkness of the cross will fad away and all who lived and died will live again and be brought before Christ where we shall all bow the knee and wash his feet with our tears. Happy Easter.

Email ThisBlogThis!Share to TwitterShare to FacebookShare to Pinterest
Labels: Christ in America, Easter, Life After Death, Resurrection of Jesus Christ, The Living Christ