Light The Fire Within

I have been working on a project to convert the few VCR tapes I have left to DVDs. Yesterday while working on that project I came across the opening ceremony for the Salt Lake 2002 Winter Olympics. I was a volunteer for those Olympics and was at the opening Ceremony. It was an experience that I will never forget. The 2002 Olympics were only five months after the horrible experience of September 11th, 2001. There were some that thought the Olympics should have been cancelled. In an interview at the opening ceremony, President George W. Bush said that he never thought (nor the Organizing Committee) that the games should be cancelled because we needed to show the world we could bring the countries of the world together and compete peacefully. He also said that if the games were cancelled the terrorists would win and he did not want that. 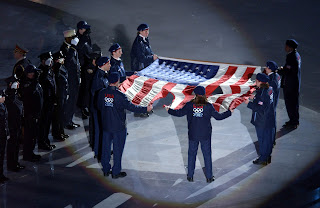 As the athletes came into Rice Eccles Stadium many of them not only had flags of their county but they also had an American flag to show their unity with our country. The flag that flew at the World Trade Center and was found in the rubble that was left (and raised up by those there) was carried in by several U.S. Athletes and some of the 1st Responders on September 11th. As you can see by the picture the flag was damaged and torn but they held it with the reverence it deserved. As the Mormon Tabernacle Choir sang our national Anthem there was hardly a dry eye in the Stadium, they sang: “Oh, say does that star-spangled banner yet wave O’er the land of the free and the home of the brave?”

On the shore, dimly seen through the mists of the deep,
Where the foe’s haughty host in dread silence reposes,

What is that which the breeze, o’er the towering steep,
As it fitfully blows, half conceals, half discloses?
Now it catches the gleam of the morning’s first beam,
In full glory reflected now shines in the stream:
‘Tis the star-spangled banner! Oh long may it wave
O’er the land of the free and the home of the brave!

And where is that band who so vauntingly swore
That the havoc of war and the battle’s confusion,
A home and a country should leave us no more!
Their blood has washed out their foul footsteps’ pollution.
No refuge could save the hireling and slave
From the terror of flight, or the gloom of the grave:
And the star-spangled banner in triumph doth wave
O’er the land of the free and the home of the brave!

Oh! thus be it ever, when freemen shall stand
Between their loved home and the war’s desolation!
Blest with victory and peace, may the heav’n rescued land
Praise the Power that hath made and preserved us a nation.
Then conquer we must, when our cause it is just,
And this be our motto: “In God is our trust.”
And the star-spangled banner in triumph shall wave
O’er the land of the free and the home of the brave!

The Theme of the 2002 Olympics was “Light the Fire Within”. Even though that theme was planned years before the tragedy of September 11th, it became the anthem of all the participants and spectators that were there. Though they were from many countries and were there to compete against each other, they were united as brothers and sisters, children of our Heavenly Father, to show the world we could compete in peace and set aside hatred and prejudice. 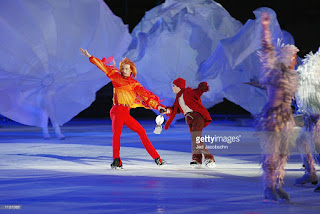 In the opening ceremony one child stood against the storms of life searching for the fire within to keep him safe. Finally, when he found it, other children each with their own lanterns entered the stadium and drove out the storms. Then LeAnn Rimes sang the theme song. Check it out.

It was an amazing experience to be part of those Olympics and the feeling of unity as a country and the Olympic spirit. The Prophet Alma speaking to the members of Christ’s Church that had been converted by his father asked those that had experienced a change of heart that if they could still feel that change? (Alma 5:26) What about those of us that were there at the 2002 Olympics or watched it on TV and felt the fire within us ignited; do we still feel that burning in our hearts? Are we still united as a country against evil and those that promote it?

The war against terrorism goes on today. Our country is in the midst of one of the most divisive presidential elections in my life time. We see violence in our schools, against our police and military. Our own media promote these things by the way they sensationalize them in the news. Just today (Sunday, June 12, 2016), the deadliest mass shooting in U.S. history took place in Orlando, Florida when a gunman walked in and killed 50 and injured many more (Desert News). Wickedness and sin are growing. Evil is promoted as good and good is now evil. The scriptures are being fulfilled that of the conditions of our day.

At the end of every Olympics the IOC President calls upon the youth of the world to assemble in four years at the next Olympics. I believe that it is time for the true believers of Jesus Christ, those that have felt the fire within, to come out of hiding and stand for the truth. We are the children of light that must shine forth in the darkness and chase away the storms that rage around us. We must be willing to stand alone just as that one child of light stood against the storms of life. He stood as a beacon of light to all the youth who finally joined him and drove out the storms. May we light the fire within and stand against the evils of our day.

Your comments and questions are welcome.
Posted by In The Palm of His Hands at 2:32 PM

Email ThisBlogThis!Share to TwitterShare to FacebookShare to Pinterest
Labels: Fighting the Storms of Life, Light the Fire Within, Light Unto the World, Salt Lake 2002 Winter Olympics, September 11 2001, Winter Olympics