From Ashes to a House of the Lord

The public has a rare opportunity to see a temple of The Church of Jesus Christ of Latter-day Saints. The Provo City Center Temple’s open house opened to the public this past Friday, January 15th and goes through March 5th. Tickets are free and you can get them here. Tickets must be in high demand because when I went there there were no tickets available. The web site promises that more will be available soon so if you want to go you need to check often. They do allow a limited number of visitors that do not have tickets to wait in a different line for a tour, so it is possible to go without a ticket. I remember going to the tabernacle on a few occasions when I was a student at BYU and loved the detail and beauty of the building.

December 17, 2010 was a devastating day for those that live in Provo or for anyone that had lived there in the past. The tabernacle was gutted by fire and it was a total loss – except for the outer walls.

Built in 1883 the Provo tabernacle was one of the oldest buildings in Utah. For 127 years many church meetings were held there and even a few presidents of the United States visited and spoke in the tabernacle. In the October 2011 General Conference, President Thomas S. Monson announced that the gutted tabernacle would be rebuilt as a temple. Construction began on May 12, 2012. An article about the reconstruction of the tabernacle to a temple described the work that it took to preserve what was left of the building:

“In the early hours following the fire, contractors were able to execute an engineering feat that had never been done before to preserve what was left of the tabernacle. An innovative lattice structure was created to stabilize the building.

"That in itself was miraculous," described Roberts. "Nothing had ever been designed that way. They built it and designed it at the same time."

“Over several weeks we removed 14 tons of debris from the site,” Dickamore said.
Once the project got the green light, the building was strengthened by removing two of five layers of brick from the interior and securing the remaining layers with steel ties. A two-layered grid of rebar was then installed inside the perimeter and filled with concrete.” (“Provo City Center Temple Ready for Public Tours”)

The following are a few pictures of the Provo Tabernacle fire, the reconstruction and the finished temple. The pictures of the fire are from a Deseret News article published the day after the fire. The pictures of the completed temple are published by the LDS Church and can be found here. At the end of the blog is a seven-minute video clip published by the LDS church of the fire and reconstruction project. It is well worth the time to watch it. It is a blessing for those living in the Provo area to have the church preserve the original look of the building and have it stand as the House of the Lord for the next millennia. 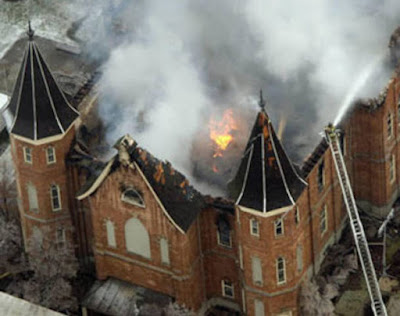 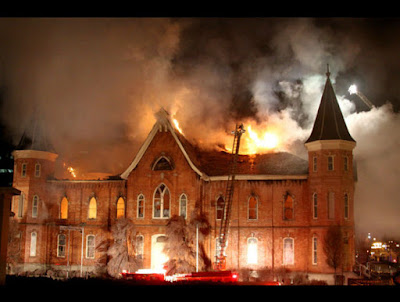 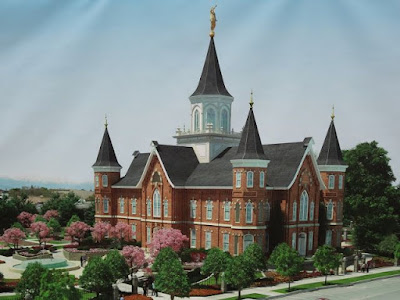